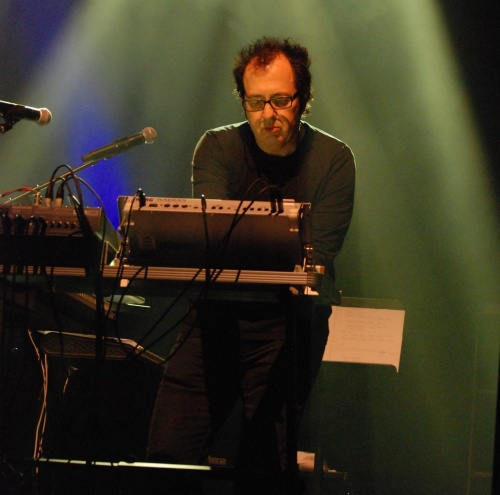 Lloyd grew up in Forest Hills, New York alongside other musical luminaries such as The Ramones, Leslie West and Simon & Garfunkel. He began playing in bands in the mid ‘60’s culminating with the self-titled release, “Haystacks Balboa” in 1970. He was signed to Polydor Records, the album produced by the legendary George “Shadow” Morton, and went on a national tour opening for Jethro Tull, Rod Stewart and The Faces, Ten Years After, Savoy Brown, Eric Burden and War and many others. This proved to be a great learning experience.
The 1970’s were spent playing and recording with various groups in many top-notch studios like Electric Lady, Hit Factory, and Criteria in Florida. It was there in 1977, while working on his bands’ album, that he rubbed shoulders with artists like Crosby, Stills & Nash, Robin Trower, and of course the Bee Gee’s who were in the process of recording the “Saturday Night Fever” soundtrack.
In the early ‘80’s, he worked and toured with Clarence Clemons and The Red Bank Rockers, Edgar Winter, Rod Price (Foghat), Ellen Foley (Meat Loaf), Todd Rundgren, and many others. A chance meeting with an old friend, Frank Aversa (producer Spin Doctors) in late 1984 eventually led to a staff writer/producer job at Sicurella/Smythe, a successful “jingle” company. It was then that his career took off, writing and arranging music for ad campaigns for Budweiser, Visa, Chevrolet, Ford, Mennen, Pepsi, and hundreds more. Most notable, Nestle White Chocolate “Sweet Dreams”, and the CBS NCAA College Football theme, which is in its 28th broadcast season. In 1987, he moved to another jingle company, Crushing Music, where he continued compose and produce many more spots. Throughout this period, he had the privilege of working with the best studio musicians in New York, Will Lee, Anton Fig, Steve Khan, Marcus Miller, Lenny Pickett, Michael and Randy Brecker, Rick Derringer and many more. Also wrote spots for artists like Carl Perkins, Sam Moore (Sam & Dave), Johnny Winter, Lonnie Mack, The Fabulous Thunderbirds, Los Lobos, Mick Jones/Lou Gramm (Foreigner), Squeeze, and many more.
Success continued into the ‘90’s writing/arranging/producing music for many major ad campaigns. In late ’93, he started his own production company, “Red House Music” where success continued. Due to the overwhelming demands and distractions that come with running a business, Red House closed it’s doors and he began the next leg of his journey as a freelance composer. It was also at this time, in 1999, that sound engineering was added to his resume. From then until present day, he has been engineering in his own Pro Tools studio. In the last decade, he has had continued success writing music for, Sears, Subway, Kia, Fisher Price, Hasbro, Kay Jeweler’s “Every Kiss Begins With Kay” and many more.
Other sonic branding besides Kay Jeweler’s include Subway “Eat Fresh”, Sears “Blue Crew”, and Edible Arrangements “Make Life a Little Sweeter”.