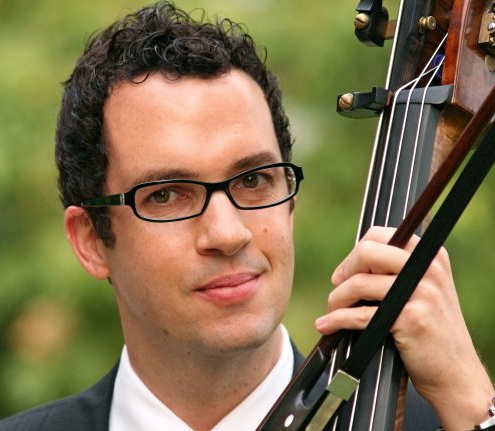 Described by Placido Domingo as “an artist of musicality and dedication” (LA Times) Timothy Eckert enjoys a diverse career in Los Angeles as a double bassist, composer and teacher. Tim performs as a member of the Los Angeles Opera and has additionally appeared with ensembles including the Los Angeles Philharmonic, Los Angeles Master Chorale and the Pasadena Symphony. An avid chamber musician, he performs with the Camerata Pacifica, the Idywilld Chamber Music Festival and Santa Monica’s Jacaranda series. Past positions include assistant principal bass with the Kalamazoo Symphony and section bass with the Long Beach Symphony.
Tim is also active in the recording industry, having appeared live or in studio with a diverse array of artists such as Eric Clapton, Madonna, Bjork, the Dave Matthews Band, Conor Oberst, the Fray and Alanis Morrisette. Composers with whom he has worked include Thomas Newman, James Newton Howard, Hans Zimmer, Alan Silvestri and James Horner.
In addition to his performing activities, Tim is on the faculty of Azusa Pacific University and the Pasadena Conservatory of Music.
As a composer, Tim’s music has appeared in a variety of programs on networks such as ABC, CBS, NBC, Fox, MTV, MyNetworkTV, Bravo, the History Channel, National Geographic and E!.